Deep into the sea off the coast of Talamone in Tuscany, lie a mermaid and a reclining figure carved in smooth Carrara marble. With other statues, they form a strange, dreamy underwater museum. They are silent guardians, protecting the sea against gangs trawling illegally at night.

With their nets ballasted with heavy chains dragging on the sea floor, the trawlers uproot the Posidonia meadows, a seagrass endemic to the Mediterranean and vital to the marine ecosystem, which soaks up 15 times more carbon dioxide annually than an equivalent area of ​​the Amazon rainforest .

The practice is illegal within three nautical miles of the coast of Italy, but because it is very profitable and impossible to police the 8,000km of Italian coastline, bottom trawlers carry on at night regardless.

For years, Paolo Fanciulli, a local fisherman alarmed at the devastation caused by the trawlers, has tried various ways to stop them, including placing concrete bollards on the bottom of the sea with the help of Talamone municipality. But it wasn’t enough.

He thought the blocks might have more impact if they were carved by well-known artists, explained Ippolito Turco, a friend of Fanciulli and president of the non-profit Casa dei Pesci, which they created together to protect the sea. A Carrara quarry offered 100 huge blocks of marble, artists donated their time and locals fundraised for the project.

“I thought it was a brilliant idea: it would attract more attention to the problem,” said British stone sculptor Emily Young, who contributed three colossal heads. 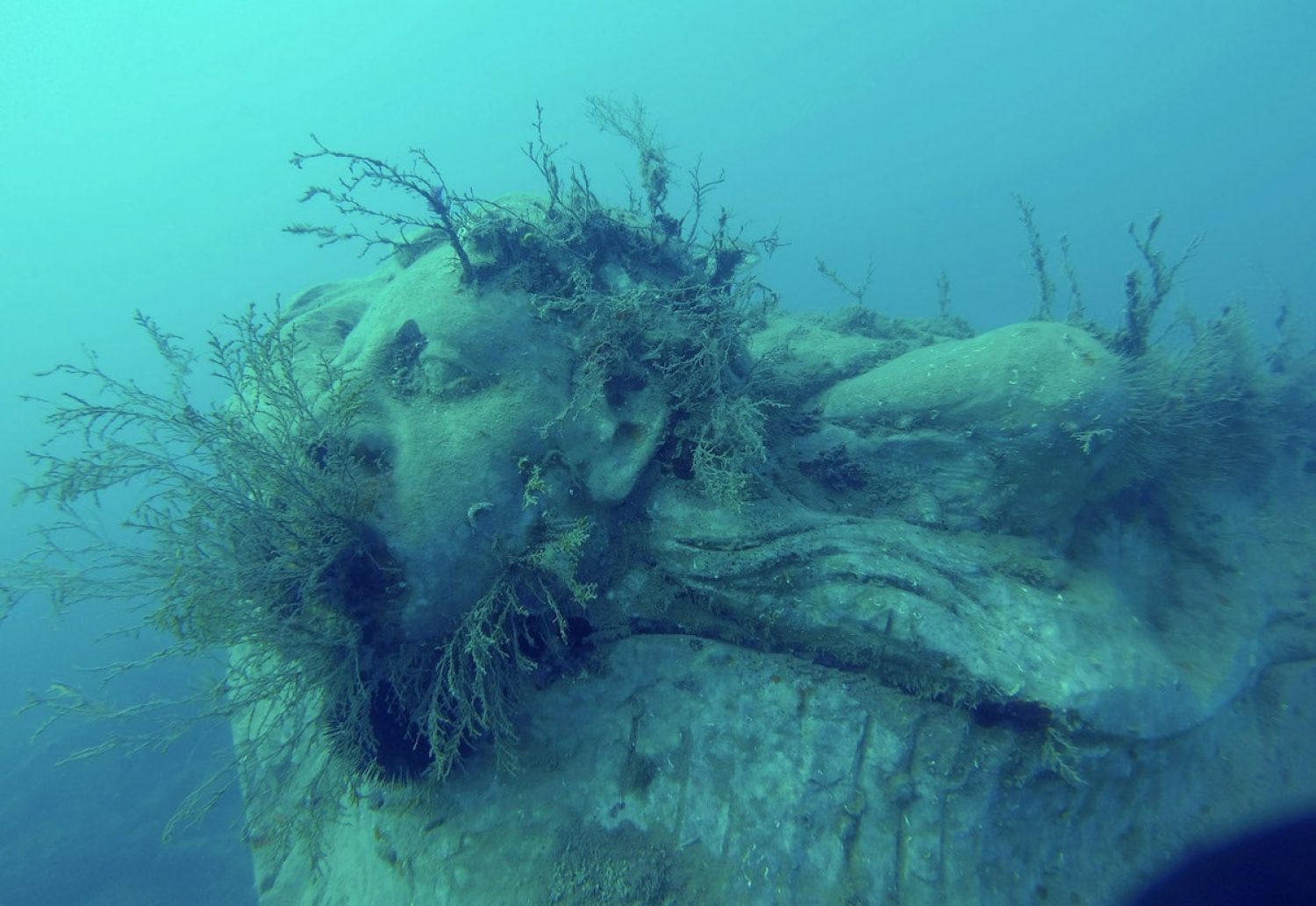 The statues also provide nooks for fish to shelter in and surfaces for plant life to grow on. Image: Carlo Bonazza

There are now 39 underwater sculptures and marble blocks at Talamone, lowered in 2015 and 2020, and another 12 are ready to join them as soon as necessary funds can be raised.

They create a defense against the trawlers and a unique underwater museum, to anyone. The statues also provide a structure on which organisms can grow, encouraging more plant life and sea creatures to return.

“The first head, the 18-ton Weeping Guardian, which was lowered down five years ago, shows a good growth of plant life, including anemones. Fish are making good use of the newly available food and hiding places,” said Young.

We hope our project inspires other communities dealing with illegal trawling

The underwater museum has completely stopped illegal trawling around Talamone, Turco said. “But now the pirates have moved north.”

The municipality of Grosseto, which is now targeted by trawlers, has joined forces with Casa dei Pesci to place additional sculptures and blocks on the seabed there. But they need money.

“We hope that our project can inspire other local communities dealing with illegal trawling around the Mediterranean,” Turco added. “There could be dozens of underwater museums guarding the entire coastline.”

Help us continue to break the bad news bias

Positive News is helping more people than ever to get a balanced view of the world – one that supports their wellbeing and empowers them to make a difference towards a better future. And as our audience and impact grows, we’re showing the rest of the media that good news matters.

But the UK’s cost of living crisis is affecting our income, with fewer people able to commit to a magazine subscription – which has traditionally been our main source of funding. Plus, paper and printing costs keep rising.

We don’t want to put a paywall on our website, because we believe everyone should have the chance to benefit from good news. But we won’t be able to continue funding our online reporting without your help.

If you value what we do and can afford to, please consider making a one-off or regular contribution as a Positive News supporter. We need 1,000 readers to contribute just £3 per month to get us through this challenging time.

And remember, as a not-for-profit, we work only in service to you, and all funds go towards our journalism.