The National Archives’ partnership with the Beyond 2022 project, its other core international partners and participating institutions has involved significant input from specialists and experts in a number of different fields. It has been an all-embracing collaboration. The project’s aim to reconstruct, virtually and intellectually, the destroyed collections of the Public Record Office of Ireland has required the digitisation of large numbers of original records in our collection and their prior assessment and, sometimes, treatment for safe handling and photography.

In this blog, Rhea Evers, Conservator, Digitisation and Large Scale Operations, discusses the technical processes behind the conservation of the series of around 400 medieval parchment account rolls and hundreds of subsidiary documents held at The National Archives in series E 101 that were produced by the Exchequer in Dublin – the chief financial arm of royal government in the Middle Ages – and sent to Westminster for audit after a number of financial scandals in the late 13th century, and their preparation for digitisation to be placed on the shelves in the Virtual Record Treasury of Ireland. These rolls are usually written in heavily-abbreviated Latin and are being translated by the Medieval Exchequer ‘Gold Seam’ team on the Beyond 2022 project.

In October 2019, conservators at The National Archives began treating a number of documents to be digitised as part of the Beyond 2022 project. This piece aims to give an insight into the decisions, workflow and treatments involved.

Our work in The National Archives’ Collection Care department supports mass digitisation and large scale projects through the preparation and stabilisation of the collection for the process of image capture. Conservation is carried out prior to digitisation because our collection of records is so vast that they vary extensively in format, size and condition. It is important that any risks to the collection and access issues are identified and minimised, and that attention is paid to stabilising the collection to aid safe handling throughout the imaging process by our Reprographics team.

The conservators hone their judgment and decision-making specifically within this context. Our remit is to minimise the risk of damage through access and ensure all information is unobscured and legible through minimum intervention. It has been said that at its core this guiding conservation principle asks us to consider what is the very least needed to fulfil a specific end, rather than the most. Through this questioning, we can hope to ensure that we preserve the historic integrity and materiality of a document for longevity, in this case for at least another 700 years.

Starting with a survey

A condition survey is an important initial step. We analysed the survey data and determined the condition, required treatments and treatment time estimates of each object, specific handling requirements or concerns and logistical notes for the imaging team. We added a contingency to the treatment estimates for documents which could pose a challenge, i.e. those which were heavily folded and creased, or large rolls where we could only access a small area at any one time. This gave us a time buffer in case we had to reconsider our approach or if treatment times slowed down, which can sometimes be very difficult to foresee. With these details we were able to determine the length of the project and the number of conservators required; in this instance two conservators were assigned to the project.

When treating parchment, its inherent nature as animal skin must be considered thoroughly. As a material it is highly reactive to changes to humidity in the atmosphere; its hydrophilic quality means it will fluctuate as it takes on and releases ambient moisture. Such uncontrolled movement is not desirable as it can lead to uneven dimensional changes and distortions to the skin and loss of information. Our approach was to limit the use of moisture in line with current thinking in the field of parchment repair. [1] We chose sympathetic and flexible gelatine adhesive for repair work [2] and flattened using gravity, pressure and time. [3]

The first documents we considered were the Pipe Rolls (series E 372) and their fair-copy equivalents, the Chancellor’s Rolls (series E 352). These are large rolls recording the audit process in the English Exchequer every year, and are some of the most information-rich medieval records in our collection. Pipe Rolls are multi-membrane parchment documents sewn together at the top in long lengths. This makes them unwieldy, which is compounded by the parchment having a strong ‘memory’ of its rolled state. We needed plenty of space to unroll them; in fact, the condition survey had shown that when unrolled completely, they would be greater in length than the imaging stations. Arrangements were made to address the size of the largest items. Space was negotiated within the studio – the communal benches would be the domain for flattening over long periods and the benches normally reserved for large-format map treatment was made available to us for the larger pipe rolls.

There were several different types of bound or tied items which needed to be separated out for imaging. When documents are bound the area surrounding the attachment is restricted. When access is limited like this, information can be concealed, meaning a clear image is hard to obtain. A protocol was outlined before treatment which went as follows:

A significant proportion, approximately 75%, of the pipe rolls featured bound structures with parchment thongs. In some cases these structures were restricting access and causing information loss. Two options were considered for these pieces: 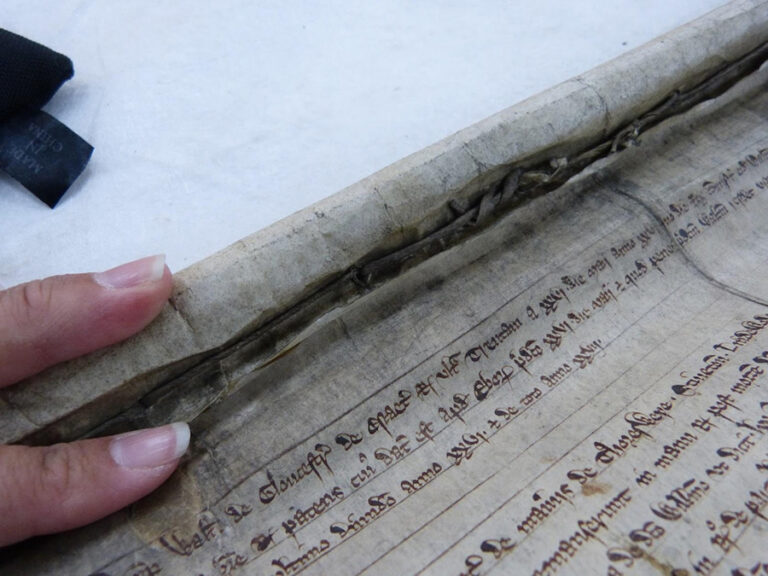 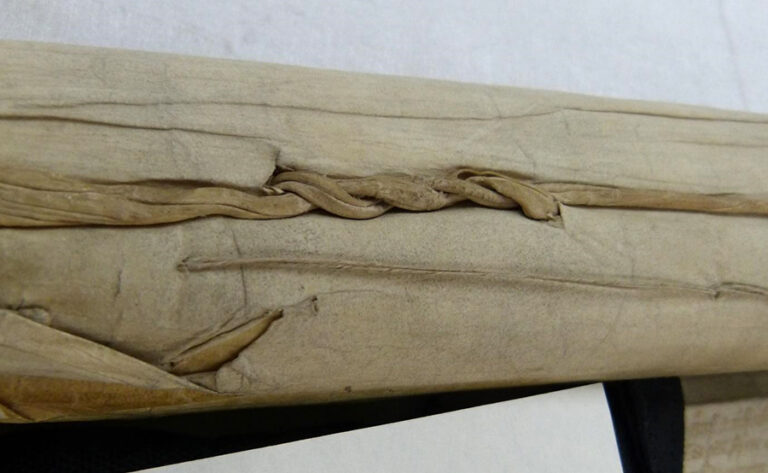 Conservators are often faced with difficult and complex decisions. We gave thorough consideration to separating out these pipe rolls in order to provide access to obscured information. Several factors were at play: the bindings were intact and functioning so their temporary removal could be considered invasive and might conflict with our minimal intervention approach. The removal process could damage the parchment substrate or the thongs, making reinsertion difficult. This is because to remove the thongs we could use a highly controlled delivery of humidification using a Sympatex™ damp pack, which we know to be an effective method at relaxing parchment slowly, but had set out to limit the use of moisture in our treatments to avoid risk of changes on a micro-level. Before reaching a decision we pooled advice from conservators from within the department as well as external organisations. We decided to leave the thongs in situ and accepted a minimal loss of information where there could be risk to the historical integrity and materiality of the document.

Treatments and other solutions

We encountered undulations, creases and pleats in both the flat and rolled parchment documents. Our aim was reduction of their severity, not complete eradication, so that information could be read clearly and any shadows on the image area would be minimised. Applying pressure with a bone folder through an inert interleaving material such as Bondina™ (to prevent burnishing the parchment) was all the coaxing many of these creases needed. Deeper folds and pleats or undulated documents required a longer period of time to settle out. As flattening parchment using gravity, pressure and atmospheric moisture is a gradual process, we prioritised longer estimates in the first week of the project. We interleaved documents between blotting paper and boards to form a packet which could be stacked to maximise our available space. A labelling system was crucial for us to keep track of when documents entered into a phase of flattening and ensured our allocations stayed relatively separate. The documents were checked regularly and, when suitably settled, could be moved on to repair work and then capture.

There were some instances of loose and degraded sewing threads between the panels of multi-membrane rolls. This made the already unwieldy rolls more difficult to handle in a safe manner as the risk of complete detachment under its own weight was high. We tensioned the original sewing to draw the panels back into their original position. This was finished by support-sewing over the existing thread fragments using the original sewing holes with an archival linen [16/2] sewing thread. Shorter treatments estimates such as this, which may only take 15 minutes or less, were completed during the flattening or drying times of adjacent documents. 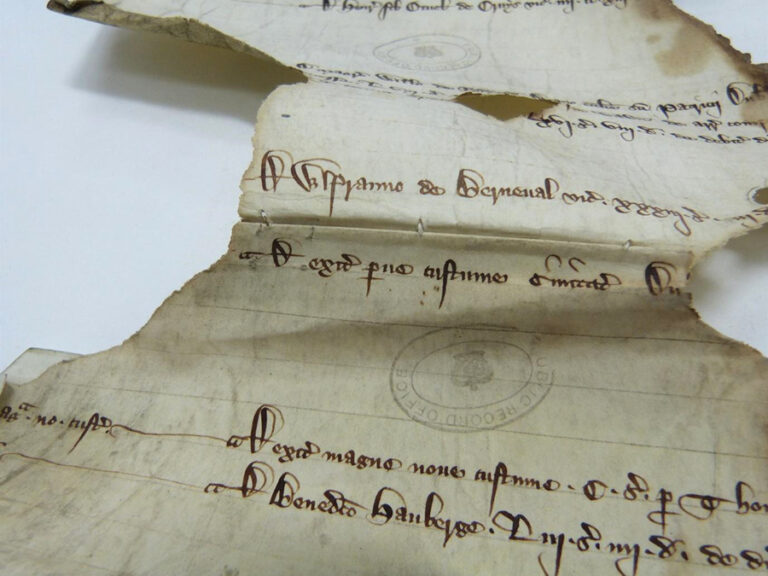 Folded pendant seals, made of fragile beeswax, and fracturing areas of brittle parchment was a common issue found among smaller writs, small strips of parchment used carrying evidence of royal commands to spend money or process accounts. Very brittle areas of parchment, at risk of fragmentation or loss, were encapsulated in custom-made Melinex® polyester sleeves with one edge left unsealed for ventilation. Particularly delicate areas of damage were supported with a fine layer of 5gsm [Tengujo] tissue and 5% (w/v) cold gelatine mousse [Type B, 221g bloom] prior to encapsulation. Neodymium magnets were used to hold folded pendant seals flat where they entered into the image area as a non-invasive and short-term solution. These were imaged with the magnets in situ. 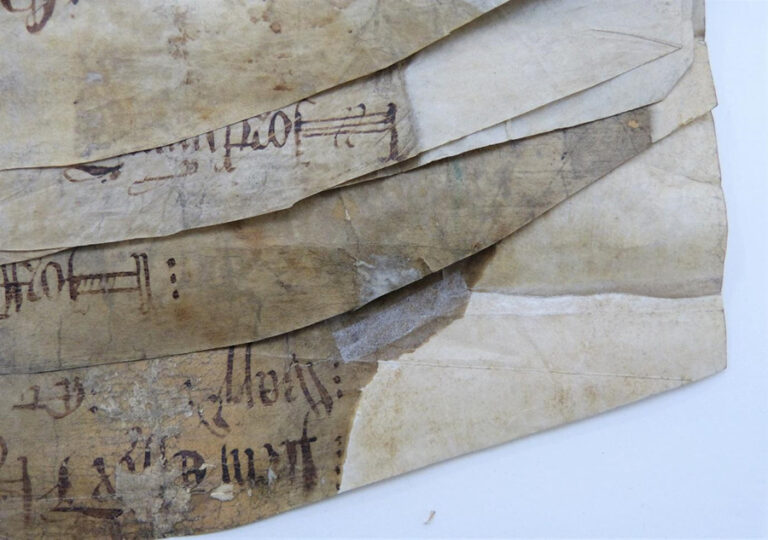 Recent and past repairs on the membranes. Catalogue ref: E 352/97 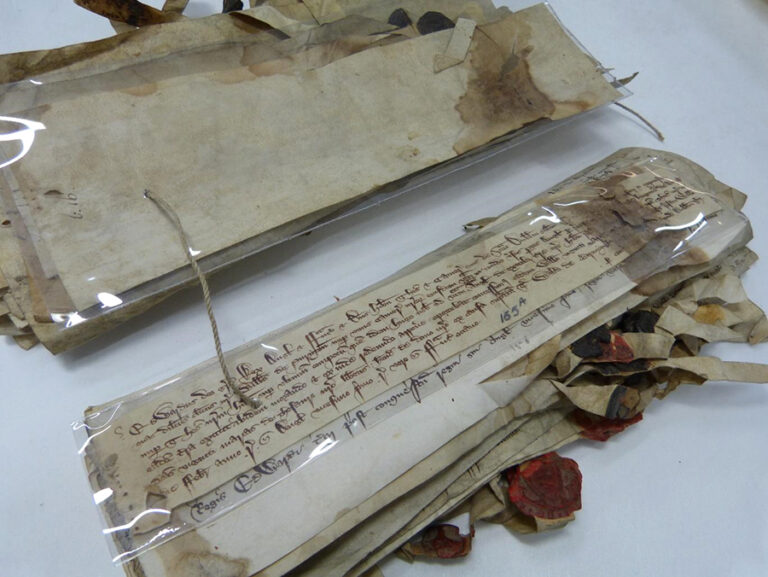 All of the treatments required were completed within the estimated timeframe for the project. The digital surrogates produced will contribute to the Beyond 2022 virtual repository.

The contingency allowed for minor changes in treatment direction or workflow pace which kept us on schedule. Although the condition survey outlined the types of treatments required there was still space for creative problem-solving, such as deciding to use magnets as a temporary measure to facilitate access while imaging. Working with a large number of parchment documents at once was a challenging prospect – keeping track of their movement required additional communication, planning and forethought. Due to there being post-capture conservation required, our labelling system was extremely important in ensuring constituent parts were reunited and that a paper-trail existed for the movement of separated documents between conservation and imaging work areas.

Parchment documents can be complex objects to treat and demand thorough consideration and research. Like all historical artefacts, examination of structural or material composition can reveal the unexpected, so an agile mindset and approach can go a long way. It was a particular pleasure to liaise with cross-departmental colleagues about these important and fascinating documents through a connection with the Beyond 2022 project. 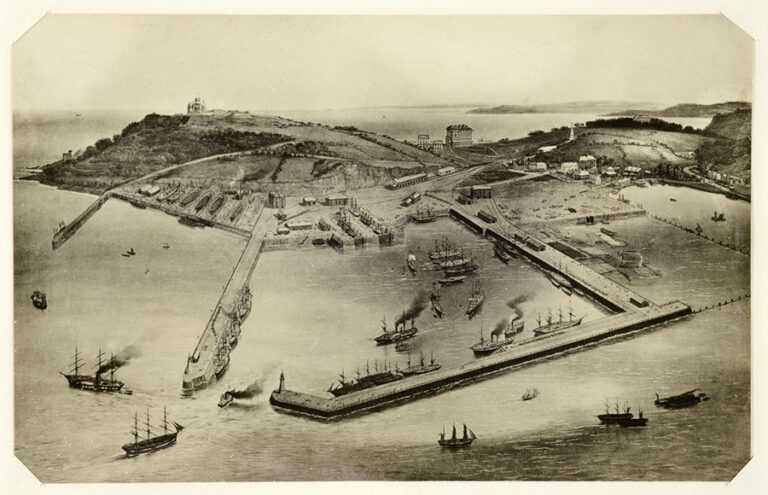 ‘Dangerous and Ripe for Mischief’: Occasions of 1810 as seen by the Residence Workplace 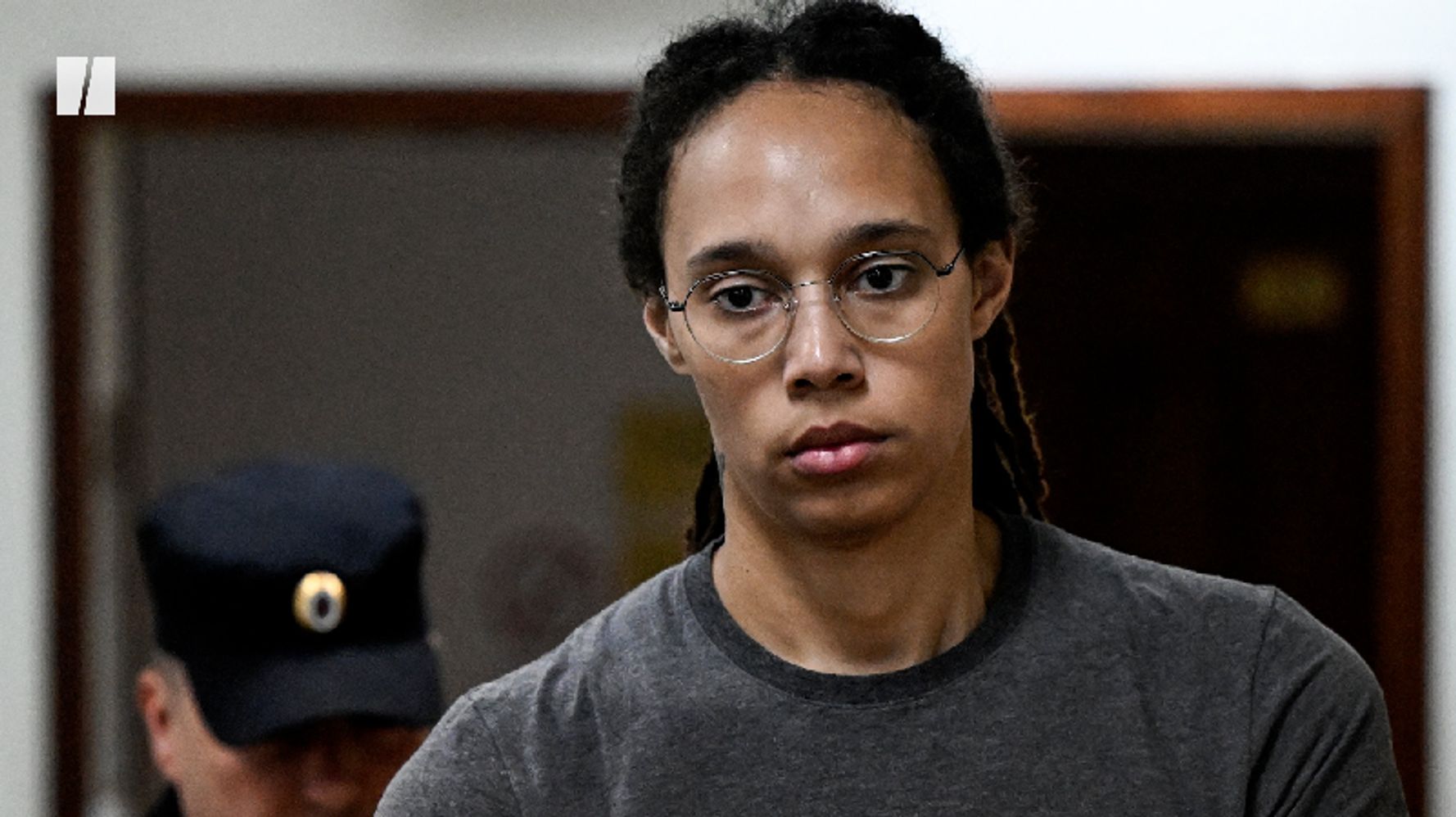 Griner Will get 9-12 months Sentence

Can something cease Liz Truss? 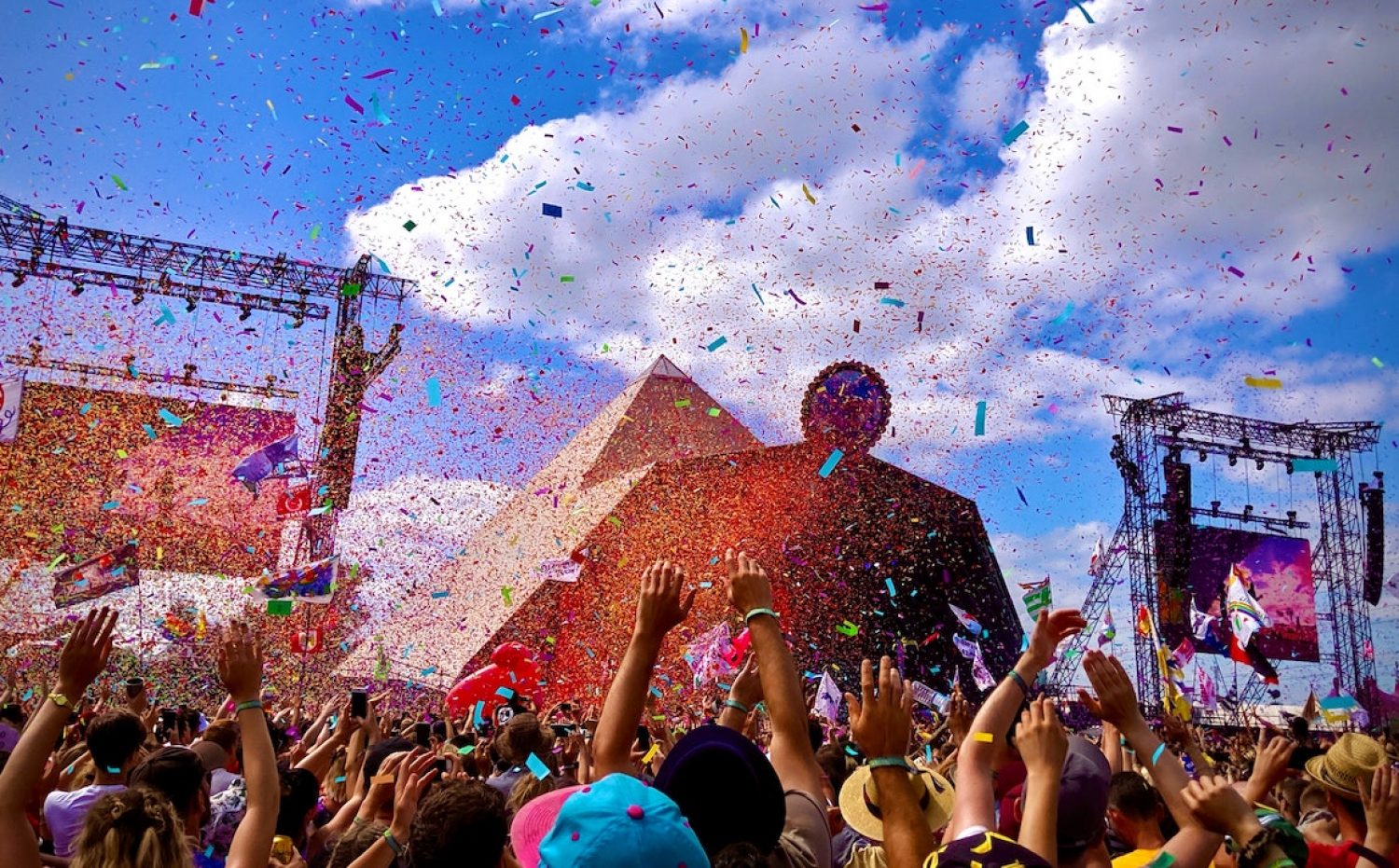